Everything You Need to Know About Common Australian Ants 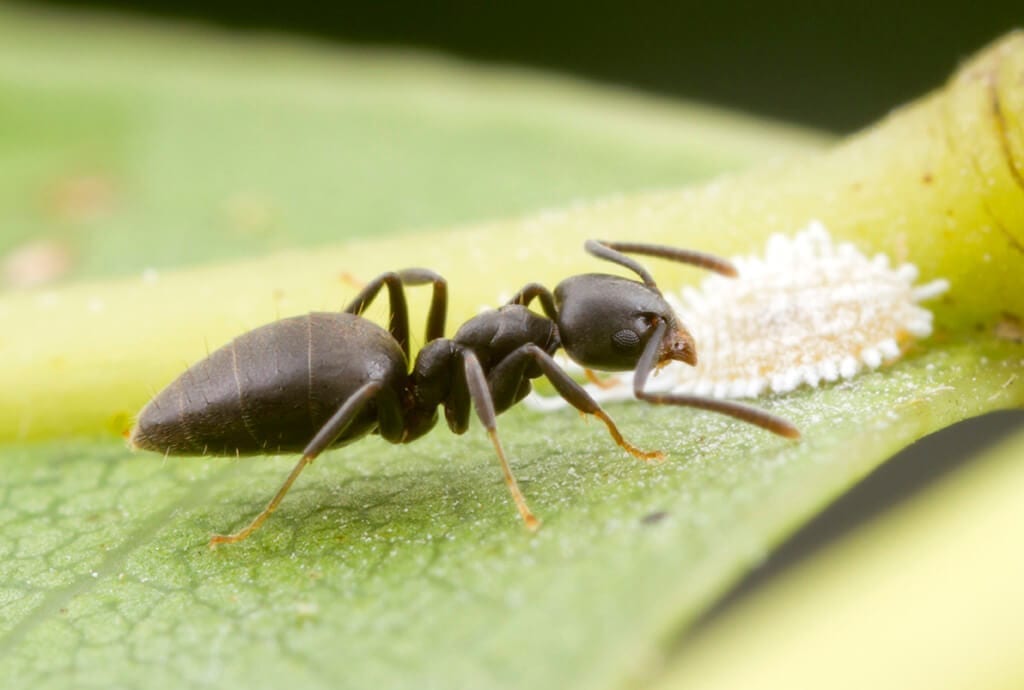 Appearance: Spotted in every home and business across Australia, the black house ant has a shiny, black body and 6 spindly legs. Their cousin, the Coastal Brown Ant, is a light yellow toned brown.

Habitat: Black house ants love to set up shop in your kitchen, garage and sometimes even dog droppings – make sure you keep benchtops clean and pick up after Fido to prevent the spread of nasties like salmonella.

Lifecycle: Fertilised eggs end up becoming female, while unfertilised eggs are male. From egg to adult, it takes over six weeks for larva to mature into functional ants.

Appearance: Argentines are bitey little buggers, ranging from a light to dark brown in colour. Argentines aggressively drive other ant species away from an area they want to colonise.

Lifecycle: Worker ants and winged ants (reproductive ants) are produced at different times. The former appear in spring and boost their numbers until autumn hits, while Kings and Queens are produced in early spring before the workers, maturing by Christmas for the summer to autumn breeding season. A thriving Argentine colony can include millions of ants! Appearance: Bull ants range from red to black with a large stinger that can hurt humans if the ant attacks. Largely aggressive, particularly if the nest is disturbed.

Lifecycle: Bull ants are ruled by a single queen with a few males for breeding – most eggs hatch female grubs, developing into a particular caste, with a majority being soldiers or workers. The queen does venture out of the nest, using the cover of night to find food to feed her nest of baby bull ants.

Appearance: Carpenter ants range in size and appearance according to their role within the colony. There are three classes, organised according to job classification, with major workers being the largest; media occupying the middle lengths and minor being the smallest.

Habitat: Although their name may already be all  the hint you need, carpenter ants can really damage wooden objects, including house frames in their quest to build a home. Outdoors, they favour soft, decaying woods and trees, creating galleries for easy movement between chambers.

Lifecycle: Carpenter colonies like to nest in satellites, so even if you do find an active nest, it won’t be the only one in the area.  From egg to maturity, workers take 60 days to become fully grown ants.

Appearance: Fire ants have a light copper head and a dark brown body, with a distinctive antennae club.

Habitat: Fire ants build independent nest mounds on top of their underground chambers, with some measuring up to 40cm high. They defend their colony with aggression, charging out to attack the intruder with a nasty sting that can produce welt 24-48 hours later.

Lifecycle: Following a reproductive swarm, a fire ant queen lays up to 125 eggs in a protected spot, hatching with 8-10 days. After 16 days, the larvae moult into workers who take care of nest building and food gathering, while the queen resumes laying up to 1500 eggs per day.

Appearance: The garden ant is dark brown to black in hue, with no stinger and a small pedicel at the waist.

Lifecycle: Queen garden ants lay their eggs in the later stages of spring and larvae hatch 3-4 weeks later in early summer. Worker ants take care of larvae, ensuring they’re fed and comfortable. Although fertile males are common, they die soon after mating for the first time.

Appearance: The green ant has a black body with a metallic green head, granting it the signature crown that inspires its name.

Habitat: Green ants favour small colonies, building their nests between path cracks and rocks, in addition to dense undergrowth and urban lawns – underground nests are common on lush lawns. They’re not bothered by rain, standing up to a light shower or retreating to their nests until the downpour stops.

Appearance: Blackish to dark brown with 2 dorsal spines with segmented antennae ending in a segmented club. Often confused with termites.

Habitat: Pavement ant colonies often pop up near water, under stones or against building foundations. They’re also fond of human buildings, breaking and entering at night to find leftover food.

Lifecycle: Populating between spring and summer, Pavement ant drones engage in nuptial flights with new Queens – afterward, a queen excavates a founding chamber and lays her eggs. After hatching, the ants spend the next few months attending to the queen.

Do you have an ant problem, but you’re not sure what species you’re dealing with? Reach out to our pest control experts today and ensure the issue is resolved safely, quickly and according to the specific quirks of the identified species. There are some things DIY cannot fix, and an ant infestation is one of them.